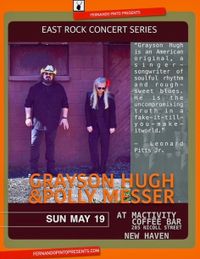 Singer-songwriter-pianist Grayson Hugh has been wowing audiences around the world for the last 30 years with his soulful singing, poetic lyrics, masterful piano playing and passionate live shows. Discovered in a New York City elevator, Hugh’s major label debut “Blind To Reason” in 1988 introduced the world to an artist who, in the words of producer Michael Baker, “looked like a blue-eyed biker but sounded like all of the great black singers in the world rolled together”. “Road To Freedom”, released in 1992 on MCA, was called “one of the Top Ten Albums of The Year” by Billboard Magazine. As his records climbed the charts, he toured the world, contributed songs to Oscar-winning films (“Thelma and Louise”, “Fried Green Tomatoes”) taught songwriting at Berklee College of Music in Boston and composed music for Contemporary Dance. Unhappy with the artifice and shallow values of the music business, he mysteriously disappeared for 15 years, then reappeared again, to the delight of his loyal fans. After his 2008 marriage to harmony singer Polly Messer (former member of Grayson Hugh & The Wildtones and the popular swing band Eight To The Bar) he released “An American Record” in 2010 and “Back To The Soul” in 2015. “Back To The Soul” earned a slot on the Offical Ballot for a 2015 Grammy in the Best Americana Album category.  Besides performing acoustic shows with Polly Messer and his band Grayson Hugh & The Moon Hawks, Grayson is currently writing songs and a score for Hungarian director Balázs Hatvani’s film “Captain Flame”, set in 1980’s Budapest.

“Grayson Hugh is an American original, a singer-songwriter of soulful rhythm and rough-sweet blues.  He is the uncompromising truth in a fake-it-till-you-make-it world.” - Leonard Pitts Jr., Winner of the 2004 Pulitzer Prize for Commentary, Miami Herald, January 9, 2019   “Grayson Hugh was honored as “Top Soul Man for Our Time” at the ROCK JUSTICE AWARDS in recognition for his decades of soulful performance, songwriting, album releases and jaw-dropping, barnstorming piano playing. Hugh, along with singer Polly Messer, completed a raucous 90-minute set upon a nine-foot concert grand piano before adoring West Coast fans who had a chance to connect again with their favorite artist.”  - Sarah Tulowkitzki, Los Angeles Times, June 8, 2018   "Amazing show last night!!! I always expect great music from Grayson Hugh and am never disappointed. But at last night's concert at The Katherine Hepburn Theater, he took us all up to a new level because of the musical chemistry with Polly. It's a magical blend!" - Colin McEnroe, Host of The Colin McEnroe Show, WPNR/CPBN, April 10, 2011