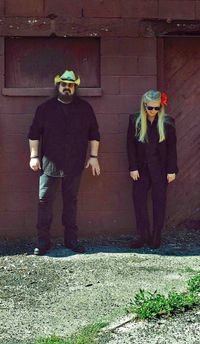 Admission is free and open to the public.

Come hear acclaimed singer-songwriter Grayson Hugh and his wife singer Polly Messer perform Hugh's songs from his albums and Oscar-winning films in an intimate coffee house setting. As Hugh himself says "There's nothing like performing music on an acoustic baby grand piano, with Polly's harmonies tuned in to my voice as if with radar. Library concerts are one of our favorite venues."

And listen to what others are saying about the songs of Grayson Hugh:

“And his lyrics! If you love words, if you’re one of those people for whom heaven is a rainy day and a good book, then know this: Hugh doesn’t write words — he writes pictures.” - Leonard Pitts Jr., Miami Herald, winner of the 2004 Pulitzer Prize for Commentary

Grayson Hugh has been there and is back again. His story – our story – has to be heard.” - Robert Doerschuk — CMAworld, May 10, 2010 “Grayson Hugh - Great Artist!” Blues and Roots Guitarist and Producer (Dwight Yoakum, Lucinda Williams, Roy Orbison, Michelle Shocked) March 1, 2016

And about the concerts by Grayson Hugh and Polly Messer:

“Grayson Hugh and his wife, the superb singer Polly Messer, did a spectacular show the other night at Infinity Music Hall. Blue-Eyed Soul's Prodigal Son is back - and stronger than ever. ” - Jack Forchette, Director of Entertainment and Business Development, Infinity Music Hall, Norfolk, CT, May 21, 2012

“At the recent concert on Friday November 15th, Simsbury Public Library was fortunate indeed to hear an hour of world class music. Singer-songwriter and pianist Grayson Hugh, along with his wife singer Polly Messer, enthralled us with not only Grayson’s superb songs, but fascinating stories behind the compositions. Their performance, in front of a standing-room-only audience of 140, would have easily been at home in any venue several times the size . In an overwhelming response, people have asked us to bring Grayson and Polly back to sing for us often! ” - Lyndsay Neffinger — Adult Services Librarian, Simsbury Public Library, November 20, 2019 “Amazing show last night!!! I always expect great music from Grayson Hugh and am never disappointed. But at last night's concert at The Katherine Hepburn Theater, he took us all up to a new level because of the musical chemistry with Polly. It's a magical blend!    ” - Colin McEnroe, Host of The Colin McEnroe Show, WPNR/CPBN, April 10, 2011

Grayson and Polly will be on hand for a meet and greet following the show, where you can purchase Hugh's CDs and have him sign them if you wish. This concert is made possible by the Friends Of East Lyme Public Library.