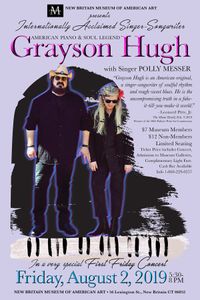 Come hear an American treasure at a museum dedicated to American Art!On Friday August 2, 2019, internationally acclaimed singer-songwriter and pianist Grayson Hugh, along with his wife singer Polly Messer, perform a very special First Friday Concert at New Britain Museum of American Art, located at 56 Lexington Street, New Britain, Connecticut 06052. Hugh's recording and touring career has brought him around the world, and his songs have graced radio, television and film. His live shows, featuring his poetic lyrics, passionate soulful singing and masterful piano playing have wowed audiences since his debut RCA album "Blind To Reason" burst on the scene in 1988. His 1992 release "Road To Freedom" was called one of the year's top ten albums by Billboard Magazine, and featured songs the Oscar-winning films "Thelma and Louise" and "Fried Green Tomatoes". In 1999 Hugh joined the faculty of Berklee College of Music in Boston, where he taught songwriting until 2003. He was also commissioned to compose scores for prominent modern dance companies. In 2010 he released his long-anticipated third album "An American Record". It was co-produced by Polly Messer, to whom Hugh was married in 2008. Polly and Grayson met in 1980, when she was singing with the popular swing band Eight To The Bar. In 2015, "Back To The Soul" was released, and was on the Official Ballot for a 2015 Grammy in the Best Americana Album category. Hugh and Messer have since performed at top venues in Los Angeles, New York, Canada and Europe.Here is a chance to hear world class artists in an intimate setting.Seating begins at 5:30PM. The concert begins at 5:45.The ticket price of $7 for Museum Members, and $12 for Non-Members, allows you access to the Museum Galleries as well as complimentary light fare. Seating is limited, so come early! A cash bar is available. For further information call 1-860-229-0257.